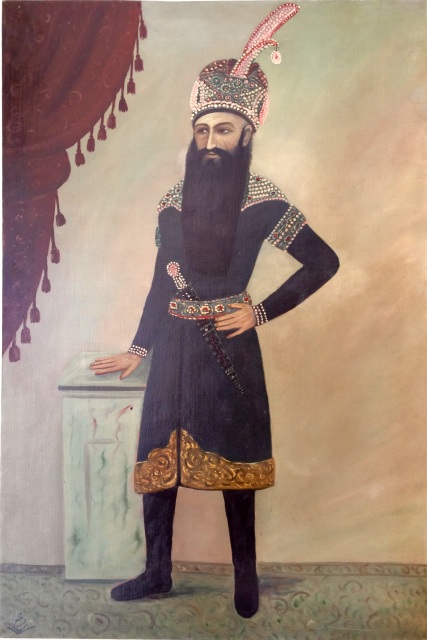 SKU:
$46,000.00
$46,000.00
Unavailable
per item
2.5 ft x 3.8 ft
Abbās Mīrzā,  (born September 1789, Navā, Qājār Iran—died Oct. 25, 1833, Meshed), crown prince of the Qājār dynasty of Iran who introduced European military techniques into his country.
Although he was not the eldest son of Fatḥ ʿAlī Shāh (1797–1834), ʿAbbās Mīrzā was named crown prince and appointed governor of the province of Azerbaijan in 1798 or 1799. When war broke out between Russia and Iran in 1804, he was made commander of the Iranian expeditionary force of 30,000 men. The war (1804–13) resulted in the loss of most of Iran’s Georgian territory and showed ʿAbbās Mīrzā the necessity of reforming the Qājār military forces. He began sending Iranian students to Europe to learn Western techniques; a first group was sent to England in 1811 and a second group followed in 1815. In 1812 a printing press was established in Tabriz, the capital of Azerbaijan, and the translation of European military handbooks was encouraged. A gunpowder factory and an artillery foundry were also started in Tabriz.
The new army was drilled by British military advisers, who taught such tactics as the use of infantry formations and close cooperation between infantry and artillery. This army distinguished itself in campaigns against the Ottoman Turks in 1821–23. During the second Russo-Iranian war (1826–28) ʿAbbās Mīrzā again led the Iranian forces. In the first year of the war he was able to recapture all of Iran’s lost territory; his new army, especially the artillery arm, was more than a match for the Russian troops. In the end, however, Russian numerical superiority and discipline, coupled with Fatḥ ʿAlī Shāh’s refusal to reinforce and replace ʿAbbās Mīrzā’s losses, led to a disastrous defeat. At the cessation of hostilities (1828), Iran had lost all its Georgian and Caucasian territories.
ʿAbbās Mīrzā was shattered by this defeat. He lost interest in military reform and spent the last five years of his life trying to maintain his own position as crown prince and feuding with his many brothers. Broken in spirit as well as in health, he died leading a punitive expedition against rebels in Khorāsān.
1 available
Add to Cart